Wind Chess Databases are offered in different formats. Most widely used is Chess Base format followed by open source PGN or Chess Assistant extensions. All chess users can decide which format is best for them and download it instantly. Subscribe to our programs starting as low as 35 EUR / year.

How to analyze a game

In the previous tutorials we have shown the possibility to analyze games quickly even without necessity to leave the ChessBase program /Wind Chess database/ environment. The fact is however, the database environment is more useful when doing the database operations like sorting, finding position, showing statistics of possible moves who played this already and displaying the individual games.   If we would like to get involved in the real analysis of the game, the database environment is not so necessary because even though the number of game in the database does matter it is only in the opening phase, or eventually the game has not been added to the database yet and if not you have to help yourself.

Principally we need to distinguish between analysis of opened game and analysis of the ended game with known result. Both types of analysis are interesting for increasing knowledge level of the player.

The ended  game is a snapshot of the recent time or far back to the past. It can be own or somebody else’s game, GM level or lower. In any case the game analysis has certain features which can be used everywhere. Let's look at  the most frequent  tools  when analysing  the  ended game
Database Wind Chess 1.0.x

The Wind Chess Database is great when analyzing the ended game mainly due to openings (8 -25 moves) which can be compared to the other games which have been already played. Please refer to the separate sections / reviews of Wind Chess.

The GUI help a lot when analyzing the game. There are several GUIs which are world famous such as FRITZ, Chess Assistant, Chess Opening Wizard (formerly known as Bookup). Generally speaking each interface can work with certain type of data formats and certain types of engines. Unlike in ChessBase DB where engines run only in so called native format with extension .eng. in other environments (e.g. GUI) we know engines of so called UCI type (.exe). These stand-alone engines run under external environments as they don’t have their own. The engines play important role in analyzing static positions. (See list of engines free or commercial on wikipedia ) 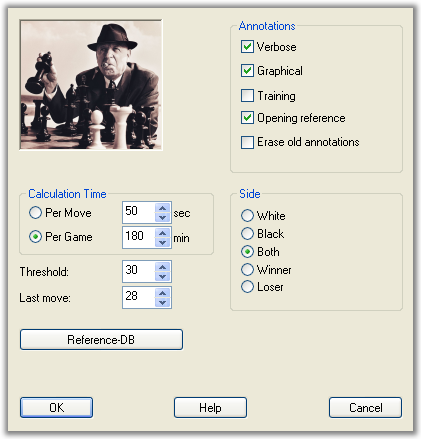 Knowledge base of analyzing positions

To deeply understand the  rules of analyzing position behind you need to see a separate article  which handles this important step.

Knowing your own game is a virtue. It is recalling of the entire game, all of the moves if some of them were not played under time pressure, or opposite – if opponent was not making moves pre-maturely. It is necessary to understand this simple factor while making analysis of the game, because these factors may have influenced dramatically the evolution of the game and determined the result of the game. Many of these games end up with a loss due to the time and one can only think hard about the reason of the failure.

If you already apply (d) it is worth to finish the analysis of the game by recording /annotating/ it so the found facts can be used in the future. The difference between analysis and annotating is the way of recording the game. One can be very detailed and one can be on high level describing only key positions. This very much depends on the annotator and his style.

It is assumed you are looking for the simplest yet most complete way of analysis of the ended  game. We can use the 2 fold method:

•  Starting with automated tools which are already offered using computer programs in the first round (see below)
•  Continue with deeper individual analysis in certain point of time of a position. For this there are different tools which are used and will be described in a separate article.

Let’s look at the main helping tools which one can use when analyzing a ended  game.

1)    Open up your own GUI (in our case we use FRITZ GUI - it is assumed this Graphical Interface is successfully installed on your PC, if you don’t have it we suggest to purchase the license separately but of course you may be also working with other GUIs of your preference)
2)    Set up Wind Chess as your default DB. Go to: Menu -> Analysis -> Full Analysis. You must be set on ‘ended  game’ and set “Opening Reference”. In the “reference DB screen, selecting the right folder where Wind Chess 1.0.x is located.

Setting up of the time depends on how much you want your engine to spend on analysis of a certain position. After the analysis has started, the engine analyzes the game from backwards to front. Once the analysis is finished your first step is completed. After a closer look at your analysis output, you realize what you like about it and what not. This tool is also using the typical phrases of positions. Sometimes they are good and sometime not. You can delete it using ‘Menu-> Insert’ and change text before or after the move.
Second step involves deeper analysis in certain situations which you consider as important. Here you can as well use the automated tools offered by GUI programs. Go to: Menu-> Analysis-> Deep position analysis. Setting is self-explanatory.
Each analysis takes certain amount of time, and it is not possible to cover all aspects of it in this short tutorial because engines have their specific characteristics just as the computer chess itself. The selection of appropriate engine requires knowledge of features and capabilities of the engine as well its strength. The knowledge base describing this is also very long thus we will cover the most important facts only. 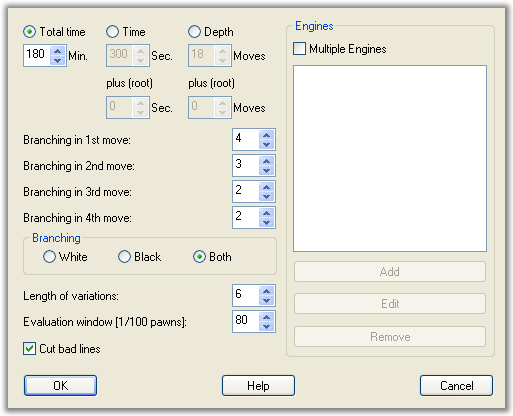 The analysis of the open game is a technical as well as ethical. In his book, Smith, R.: Modern Chess Analysis, Gambit 2004,  ICCF Grand Master and US Champion Robin Smith  for the first time opened up a dilemma on using computer analysis in the correspondence chess. The computer analysis is no longer a domain of correspondence chess players. We all know even the best players use the team of advisors and computer analysis so they have ready novelties in the openings or playing unexpected moves in the already played novelties.   Smith in this booked showed many weaknesses of the engines and inability to pick their results of analyses. Therefore you need to strictly differentiate supporting analysis which helps chess player to verify if he didn’t do any blunder moves (big mistakes) or looking if the variety of known moves is complete or not. Also the dynamic or interactive analysis simulates possible course of the game however nobody knows if players will play it – only the future will show it.

It is possible to play a position using static approach using engines with “infinite time  icon on FRITZ GUI”  analysis.  In depth of 20 half-moves the analysis is not completed and over 22 half-moves already useless. The results between these two figures are also questionable just as the entire analysis. Already R. Smith and many before defined engines with limited horizon view. They are not able to know what will happen after their analysis is performed. As we know the game is not set in 10 moves therefore many players use their intuition when guessing the future of the game.

When human while analyzing a game uses the engine to simulate an opponent.  This analysis is bit more advanced as static one when player is simulating the answers using the engine. The problem is that many engines don’t understand or partially understand certain moves or don’t have them recorded at all. So which engine to choose from when doing the interactive analysis? The answer is the experience with the engine itself or faith the engine will not come up with anything better anyway. However this is NOT true at all. Many sharp positions which engine “Rybka” never sees, older engine “Junior” sees quite well. Almost all transitions into the endgame are heart attacks for all engines.   The value-add of the engines is far less important than many chess beginners would think of.

You may select either or but the end result is to be reviewed. Everything has its pros and cons. In the shootout tournaments where same engines play against each other, one loses the variety of chess programs because the program is set to play against itself. In the Round Robin tournaments the more powerful engines beats the less powerful, but is the result correct? Does it correspond to the reality? These are the questions which one should be aware of. Therefore even in this category one may not be certain what to do next… He and she can only guess and that is the beauty of today’s chess.

To conclude the analysis of the open game:

◦    The analysis of the open game can be performed by computer but also by literature or looking to the played games before
◦    The chess engine is good help but bad advisor. At the end of the game it will tell you what have you done wrongly and capitulate (withdraw) and call it your fault.
◦    The transition to endgames using engines is a nightmare. You should definitely avoid all known engines to help you here. (maybe the chess world is waiting for the next “perfect engine”) The only real suggestion is to use Nalimov tablebase of endgames.

You should create a great reserve of time when analyzing a game, anyway your next move will be done by your own intuition which improves with number of games played – sometimes 200 but sometimes already 30. (Real games, not blitz)

We use Sync.com Cloud

How to use sync.com

We are mobile devices positive 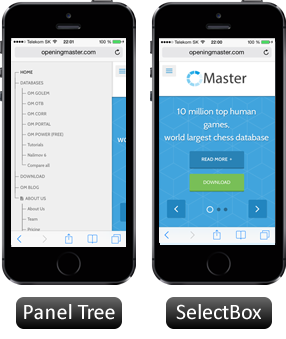 For mobile devices, there are two options, a dropdown panel menu in a tree format or a select box elements.

The Responsive format of our web pages brings you higher satisfaction of viewing our content while communicating with us on the road.